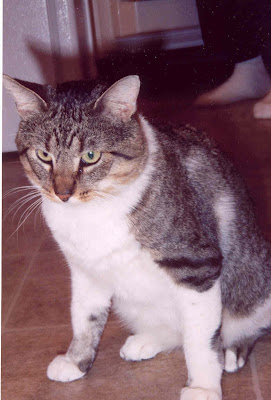 My cat, Buster, AKA Bubba, has not been home for a week. The last anyone saw of him was the morning of May 31 when he went out for his morning constitutional. He is wearing a microchip that, when scanned, will identify him and our contact information. I have verified that the city's animal control unit and the nearest humane society scan each animal, dead or alive, that is brought to them. Pat and I have plastered the neighborhood with flyers bearing his mug shot and I have stopped dog walkers and joggers whose route takes them through our hood to let them know of my search.

I have received a couple phone calls from neighbors alleging sitings, including one from my next-door-neighbor who should recognize him. She said he ran across the street in front of her about 6 blocks from us, but she described him as "scrawny and messed up." By no stretch would anyone describe Buster as scrawny. I can't believe he is on the loose. I think he is trapped somewhere or dead. This cat is a home-body; he doesn't stray (no pun intended) far from his food dish or his favorite napping nests. The longest he has ever been away from the house, to hunt bunnies or visit some of his homies, is about 5 hours. Pat suggested I offer a reward, but I think being released from his highly annoying pestering to get out, 5 am meowing and constant begging for food would be reward enough. I showed his picture to my yoga teacher, Jeanne, who claims to be a pet psychic, and she said she got the revelation that he is in someone's house. I was glad to hear he is not dead, but I'm starting to get impatient for his release. She suggested I try to communicate with him during dreamtime. I tried that, but so far no Buster. So I'm sending this message out into the Universe: Please send my kitty home!!
Posted by Mosassy at 11:59 AM