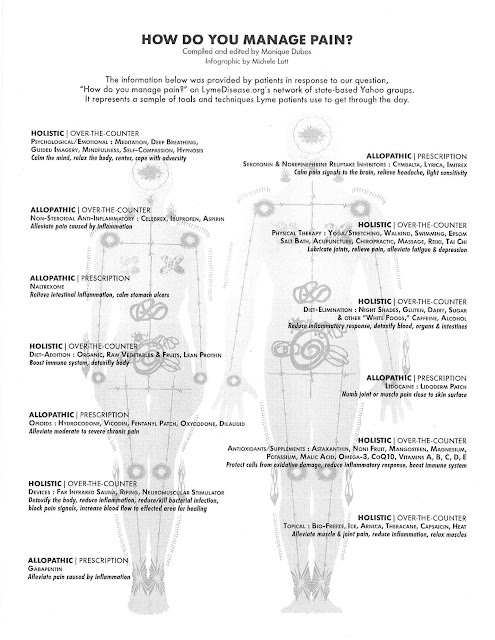 Posted by Mosassy at 6:35 PM No comments:

The Burden of Lyme Disease


The burden of Lyme disease

The recent JPMorgan multi-billion-dollar trading loss (estimates are nearing $6 billion) has been blamed -- somewhat jokingly -- on Lyme disease. The chief investment officer, Ina Drew, responsible for oversight of the hedged bet that went bad, was ill, unfocused and unable to perform effectively.
I have yet to read a report that implies any sympathy for the health and financial burden shouldered by Drew and thousands like her who have Lyme disease in the United States today.
Lyme disease affects at least 250,000 Americans, as reported to the Centers for Disease Control, which estimates that the true number is likely about 10 times greater. It's easy to find horrifying stories about how Lyme disease devastated somebody's life; in many cases whole families are infected. It's more difficult to know the current monetary costs of Lyme. A 1998 CDC study of patients with Lyme disease found these yearly cost averages: neurologic Lyme disease, $61,243; Lyme with cardiac involvement, $6,845; and Lyme with arthritic involvement, $34,354.
The data are old, but consider this: Lyme disease is under-reported; reported cases have risen by 180 percent in Minnesota in the past decade; medical costs have also risen sharply; and insurance companies commonly deny claims for treatment after the first few months. Sure, those sums are laughable to players like JPMorgan. They are anything but a joke to the thousands of sufferers of Lyme disease.
Monique Dubos, Minneapolis
Posted by Mosassy at 6:22 PM No comments:

Thanks, LATV (printed April 24)
Monique Dubos
FOREST LAKE — As anyone reading the papers these days is aware, experts are expecting an unprecedented number of ticks this season, bringing with them increased risk of exposure to tick-borne diseases, such as Lyme, babesiosis, and anaplasmosis.
The need for information about prevention and treatment of these potentially devastating illnesses has never been greater. Luckily, Forest Lake’s own LATV has been airing “Lessons in Lyme” each weekend in April to help the public better understand Lyme and how to prevent it from derailing their lives.
“Lessons in Lyme” is a three-part DVD series created by Wyoming native, family practitioner and Lyme educator, Dr. Elizabeth Maloney. Dr. Maloney has also developed continuing education courses on Lyme disease for healthcare practitioners. For more information on Lyme and other tick-borne diseases, visit mnlyme.com.
Editor’s note: Dubos is president & communications coordinator for the Minnesota Lyme Association.
Posted by Mosassy at 6:19 PM No comments:

Letter to the Editor in Star Tribune, May 23

In a recent commentary, Chris Fields, the Republican challenger in the Fifth Congressional District, suggested that Democratic U.S. Rep. Keith Ellison isn't working hard enough for Minnesota families, specifically poor families ("North Side needs attentive leadership," May 21). Fields' clever turns of phrase, such as "customized solutions" and "smart, selfless leadership" belie the evidence that Republicans' assault on services relied on by the poor -- and, increasingly, by the middle class -- leave folks to fend for themselves.
Republican cuts in programs for affordable housing, transportation and health care; its attempts to limit voting to a select few (Republican) constituencies, and its attacks on worker and civil rights all have contributed to the erosion of our communities.
Ellison has focused like a laser beam on alleviating the struggles of working-class families since he took office in 2008. Fighting the relentless Republican strategy to scuttle the American Dream, he has authored or supported bills to create jobs; protect homeowners, workers and consumers, and rebuild crumbling roads and bridges. To help pay for these, Ellison is asking the rich to invest in our collective prosperity by paying the same percentage in taxes as the rest of us do.
"Everybody counts, everybody matters" -- Ellison's motto -- describes his commitment to the American values of fairness and inclusion. Yes, it is that simple.
MONIQUE DUBOS, MINNEAPOLIS
Posted by Mosassy at 6:08 PM No comments: