They were going on and on about getting back to "conservative values" and puttin forth policies to match instead of fighting the culture wars with issues like abortion, and blaming Bush for being so unpopular that they were bound to be caught up in his sinking, stinking dragnet, blah, blah, blah.

I missed the first 10 or 15 mintues, but during the rest of the show NOBODY mentioned their complete abandonment of the concept of the "fair fight;" their Malcolm X-style politics of winning by any means necessary, using fear and smear tactics, voter disenfranchisement and purging voters from the rolls; their myopic loyalty to the party above all else, shredding many constitutional protections and the thorough politicization of the justice department being the most blatant examples.

Listening to John McCain's concession speech last week, I perceived a glimmer of the man who earned the nickname "Maverick," a man who, at times, has joined with Democrats to pass laws that were for the good of many instead of the few:


"My friends, we have — we have come to the end of a long journey. The American people have spoken, and they have spoken clearly.
A little while ago, I had the honour of calling Senator Barack Obama to congratulate him.
(BOOING)
Please.
To congratulate him on being elected the next president of the country that we both love.
In a contest as long and difficult as this campaign has been, his success alone commands my respect for his ability and perseverance. But that he managed to do so by inspiring the hopes of so many millions of Americans who had once wrongly believed that they had little at stake or little influence in the election of an American president is something I deeply admire and commend him for achieving . . .
I urge all Americans ... I urge all Americans who supported me to join me in not just congratulating him, but offering our next president our good will and earnest effort to find ways to come together to find the necessary compromises to bridge our differences and help restore our prosperity, defend our security in a dangerous world, and leave our children and grandchildren a stronger, better country than we inherited.
Whatever our differences, we are fellow Americans. And please believe me when I say no association has ever meant more to me than that."
McCain's words that night reflect a sentiment I stupidly believed would convert all cynics, myself included. I said to my husband, "Maybe now the devil will give him back his soul."

Then last night I watched "Boogey Man: The Lee Atwater Story." Man, was that a powerful Frontline episode! Now I see where Rove got his dastardliness. Apparently he is a forefather of smear and fear politics and a mentor to Turd Blossom. I was too young or not paying attention to know about Atwater, but I do remember the Dukakis character assassination, the Willie Horton ad and the revolving door ad. He had the gall to not only deny manipulating white folks' fears of scarey black guys but also denied being behind the ads at all. Except that one of his friends and allies told Frontline that Atwater himself showed him an advance of the tape.

There is some question as to whether Atwater was sincere when he repented at the end of his life those mean-spirited and divisive acts when he developed a brain tumor that would eventually kill him. One guy said he began reading the Bible, and that one passage particularly haunted him suggested that the attainment of power through less than scupulous means was an empty achievement and comes at a high cost. Atwater wrote that, in the end, relationships, not power, are what's important. Apparently he sent letters of apology to anyone whom he thought he'd hurt, even Willie Horton. But another guy, in helping to clean out his stuff after his death, found Atwater's Bible still wrapped in the plastic it came in. He accused Atwater of spinning to the end.

Now that we can see light at the end of a very long, dark tunnel, assessing the legacy of such scorched earth tactics is important for Republicans if they are to move forward in the spirit of cooperation, reparation and renewal of our planet, our politics and our policies. With a few exceptions (Retired OK Congressman Mickey Edwards, who wrote in the Huffington Post earlier this year, "Republicans in the House and Senate (have) repeatedly humiliated themselves in their willingness to toss aside the most important elements of American constitutional government"), I don't hear many of them doing that. It doesn't seem like they have learned a thing.
Posted by Mosassy at 11:57 AM No comments:

During the Halloween festivities of the past week I saw someone dressed as a pilot and remembered, HEY! I could wear my old flight attendant uniform next year! So I went home and went to the closet where I was sure I would find it. It wasn't there. I went to another closet, no sign of it.

We only have 3 closets, and I went through each of them twice. I searched my memory bank. I hadn't seen it in a long time. My husband of 14 years said he has never seen it. I decided I must have gotten rid of it in a fit of closet purging before we moved. But I was sure I would have kept my wings, so I went looking in every nook and cranny of my house.

I have pulled out and picked through every drawer, every box, every bag and satchel and found stuff I can't imagine ever needing again, but no wings.

I am gripped with nostalgia and longing for my Pan Am history, even though I haven't given it any thought for years. I'm going as a flight attendant next year if I have to create the costume from scratch.

So I went on ebay.

I know I'm late coming to this party but I've become completely obsessed. I have purchased two things from that site in the past but I did not bid for them, and this bidding thing is whole new drug.

When I got on the site on Tues, to distract me from the election fervor, I found a treasure trove of Pan Am memorabilia: posters, postcards, replica airplanes, ash trays, clocks, t-shirts, time tables, menus, advertisement reproductions.

I have so far bought 2 old ads and And replacement wings?

There was one set of the style of wings I wore - I was outbid. There are a couple of the metal ones that were given away to kids - I'm still in the running but have competition, so I'm "watching" those.

Watching apparently means checking the website every 10 minutes even though the bidding doesn't end for another day.

I had to set up a separate "ebay" folder in my email inbox to track of my bids.

There are a couple of groovy scarves from the 70s - I'm also in the running for one of those.

My heart is racing, my breath is short and fast. I'm reviewing all the stuff on the watch list in my dreams. Which do I really want? How high am I willing to go? Or have I just gotten caught up in the fervor of competition? If this keeps up I'll have to check myself into treatment.

I've already bought 2 advertisement reproductions -- one with a beach scene of Impanima and the other and ad for in-flight movies -- and a blue Pan Am globe ornament.

The big ticket item? Original, mint condition wings from the 1960s. Yes, I bid on those, too. I'm out of control. My husband would freak, and I think I will too if I'm the winning bid, so I can't say how much.

I guess this is what political junkies do when they no longer have a campaign to occupy their attention.

UPDATE: I won the pin pictured above!! Next up: this scarf from the 70s uniform: 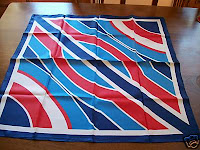 Posted by Mosassy at 5:20 PM No comments: