“A Total Rollback Of Everything This Country Has Stood For”: Sen. Patrick Leahy Blasts Congressional Approval of Detainee Bill

AMY GOODMAN: You gave an example, Senator Leahy, when you talked about what would happen here. And, I mean, even the fact that “habeas corpus” is in Latin, I think, distances people. They don’t quite understand what this is about.

AMY GOODMAN: You gave a very graphic example. You said, “Imagine you’re a law-abiding lawful permanent resident. In your spare time you do charitable fundraising for international relief agencies that lend a hand in disasters.” Take that story from there, the example you used.

SEN. PATRICK LEAHY: You send money. You don’t care which particular religious group or civic group it is. They’re doing humanitarian work. You send the money. It turns out that one of them is giving money to various Islamic causes that the United States is concerned about. They come to your house. Maybe somebody has called into one of these anonymous tipster lines, saying, “You know, this Amy Goodman. I’m somewhat worried about her, simply because she’s going -- and I think I’ve seen some Muslim-looking people coming to her house.” They come in there, and they say, “We want to talk to you.” They bring you downtown. You’re a legal alien, legal resident here. And you say, “Well, look, I’ve got my rights. I’d like to talk to a lawyer.” They say, “No, no. You don’t have any rights.” “Well, then I’m not going to talk to you.” “Well, then now we’re twice as concerned about you. We’re going to spirit you down to Guantanamo, and we’ll get back to in a few years.” And, I mean, that could actually happen under this. And these are not far-fetched ideas, as the professor knows. He’s seen similar things.

And with that, and I would love to continue this conversation, unfortunately I’ve got to go back to my day job, back to the judiciary. I think this is going to go down as one of those black marks in the Congress. You know, I wasn’t there at the time, but virtually everybody voted for the Tonkin Gulf resolution. When I came to the Senate, you couldn’t find anybody there who thought that was a good idea. They knew it was a terrible mistake. You had members of congress supported the internment of the Japanese Americans during World War II. Everybody knows that was a terrible mistake now. That day will come when everybody will look at this and say, “What were we thinking?”

AMY GOODMAN: Patrick Leahy, thanks very much for joining us. We only have about 30 seconds. Michael Ratner, president of Center for Constitutional Rights, your final comment on this.

MICHAEL RATNER: This was really, as the senator said, probably the worst piece of legislation I’ve seen in my 40-year career as a lawyer. The idea, and even the example Senator Leahy gave, of someone being picked up, you don’t need anything. The President can decide tomorrow that you, Amy, or me, or particularly a non-citizen, can be picked up, put in jail forever, essentially, and if you're a non-citizen in Guantanamo or anywhere else in the world, you never get a chance to go to court to test your detention. It’s an incredible thing, and any senator who voted for this, in my view, is essentially guilty, guilty, guilty of undermining basic fundamental rights and may well be guilty of war crimes, as well.

Posted by Mosassy at 1:35 PM No comments:

Posted by Mosassy at 2:15 PM No comments:

In his article Replaced by a Chimp: Life After Net Neutrality, in The Nation online edition this week, Jeffrey Chester argues that, if Network Neutrality protections are not included in Alaskan Senator Ted Stevens’ telecom bill, which may yet be put to a vote by the senate this year, not only will the public interest of equal access to information, goods and services be undermined, but the network will become little more than another conduit for mainstream, low-brow “infotainment.”

The global media landscape has become fragmented at the same time that media power, that is the power of media outlets, has become consolidated. In 1983, 50 companies controlled 90% of the media. Today it's 10 companies. That equal access to the data housed and shared on the Internet is at risk directly threatens the democratic value of the World Wide Web. But by allowing corporate interests to control that access, through tiered pricing, we further erode the principles of equal access to information for all. writes, “The Stevens bill not only proposes to scuttle network neutrality rules but also undermines key policies designed to insure community influence over how broadband networks serve the public interest . . .” Not surprisingly, the Bush administration and much of the GOP are arguing for less government control, not more. But if the services of telecom companies aren’t regulated, it’s likely that the greater proportion of information and messages crisscrossing the network would do what autocratic government media do: support the administration’s goals, which these days lean toward suppression of information rather than disseminating it. The telecom companies are spending piles of money, mostly heaped on those in the ruling party, to defeat Net Neutrality. This point is clearly stated in the article: “Stevens's talking points are actually being scripted--and paid for--by phone industry lobbyists.” What do the telecoms have to gain? One can surmise it would be mountains of money. And what would the ruling party gain from telecoms having more control over levels of access? For the administration, it’s a consistent message, which seems to include the persistent admonition not to change our way of life, to keep everything status quo. The status quo doesn’t appear to include protecting the current rights and protections afforded by the constitution, no, it seems to mean preserving the right of comfortable complacency. Remember, after the attacks of Sept. 11, 2001, we were encouraged to go back to our daily lives, get back to the mall. “Such dumbing-down of broadband is more likely in the absence of network neutrality rules. Expect media conglomerates and advertisers to flood our broadband networks with chimps selling beer and ketchup-colored clowns pushing fast food.” To this end, global mass media is more efficient than local, community-produced media. And it’s no coincidence that the telecoms lobbying for the authority to set their own usage fees are the same cabal that supplied the administration’s security agency with the phone and email records of their customers earlier this year.

The representatives who are reaping the cash bonuses are hardly of one mind (or even one party). Republicans may not all have the same motivations as the administration, but they are acting from the same playbook: they want to continue as the ruling party. “The GOP--including the White House--is still pushing hard to kill network neutrality. For example, at a hearing last week before Stevens's committee on his renomination for another term, FCC chair Kevin Martin came out in defense of the big cable and phone companies. The FCC chair said he thought it was fine for Verizon and others to begin charging extra fees to those content providers that want to be placed on faster Internet lanes.”

It’s clear that at least one outcome of media consolidation is global, social hegemony, assurance of complicity of the public at large in the objective of the ruling class. The message that society receives from the Power’s That Be comes in many forms: news, advertisement, “infotainment,” etc, and the media corporatocracy controls most outlets. It’s a tragedy that the Internet, perhaps the last public commons, may be incorporated into that entity (no pun intended). Hugo Chavez described what many believe is the sinister objective at the UN on Wednesday: “The government of the doesn't want peace. It wants to exploit its system of exploitation, of pillage, of hegemony through war.”

Blood from a turnip

Amazing, an insurance company selling ersatz malpractice insurance to CIA agents to cover their asses if they are sued for torturing detainees. Guess who ultimately picks up the tab for these policies?

CIA counterterrorism officers have signed up in growing numbers for a government-reimbursed, private insurance plan that would pay their civil judgments and legal expenses if they are sued or charged with criminal wrongdoing, according to current and former intelligence officials and others with knowledge of the program. Read on . . .

Posted by Mosassy at 3:25 PM No comments: 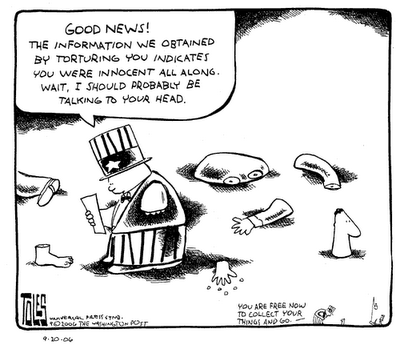 Hahahahahaaah! I wish that weren't funny, or that it wasn't an issue in current events that a cartoonist was compelled to characterize. I wish a lot of things, as we all do these days, of course.

Looks like the talk about Iraq being a staging ground for military forays (doesn't 'forays' make it sound fun?) into Iran, etc, wasn't all that cynical. After all, we had to pull out of Saudi Arabia after the attacks of 9/11/01, which was what bin Ladin (and possibly the House of Saud) was aiming for, and if we're gonna shine the light of Democracy across the Middle East, we need a base of operations.

If you haven't yet picked up the Guardian muckraker Greg Palast's book, "Armed Madhouse," you must. I was up later than I should have been reading and even laughing - thankfully, or I would have been crying. He's a bit of a ranter and kinda hard to follow in some of his narratives, but he sure has uncovered a tangled web, and man-oh-man is our government up to some shit. They can't even agree on what their mission is in the Middle East; it's unfortunate they agree we oughta be there. With the "madhouse" chock full of megalomaniacs, it makes sense they would all have their own ideas about how to run the world.

Philosopher William James proposed that if our culture ever hoped to
shed the deeply ingrained habit of going to war, we'd have to create a
moral equivalent. It's not enough to preach the value of peace, he said.
We have to find other ways to channel our aggressive instincts in order to
accomplish what war does, like stimulate political unity and build civic
virtue.

Astrology provides a complementary perspective. Each of us has the
warrior energy of the planet Mars in our psychological make-up. We can't
simply repress it, but must find a positive way to express it. How you
might go about this project?
Posted by Mosassy at 9:38 AM 2 comments: