Letter to the editor

I just sent this to our local paper:


The President’s recent lifting of the off-shore oil drilling ban and subsequent calls to begin exploration and drilling in ANWAR from John McCain and Michele Bachmann, right-wing media pundits, and everyday folks who feel squeezed and anxious from high gas prices, are all based on misleading information. Exploration is speculation, not a guarantee. What’s more, experts agree that no oil would be available from those sources for another decade and would make no dent in current prices. Granting oil companies rights to these resources would only insure their right to control the flow – and the profits – of whatever oil they find. We should capitalize on this moment, when attention to energy and environmental issues is high, to increase our use of fuel from renewable sources, not cling to a fuel source that is detrimental to our civilization in the face of global warming. Vehicles are in use today -- or can be converted -- that can run on electricity, biofuels, and solar energy. Congress should direct oil companies and the auto industry to spend the subsidies we give them on current and emerging green technologies that will not only provide jobs in the inevitable new economy, but also mitigate the havoc carbon-based fuels are wreaking on the world as we know it.
Posted by Mosassy at 4:59 PM No comments:

"I visualize walking down to the Mississippi River and swimming every day in the long, warm days of summer, in the beautiful clean sparkling water of the merry Mississip!"

On to today's perfect world scenario, but first, some real-life back-story : Yesterday, I and a few colleagues met with a rep from the Xcel Commercial Environmental Policy office (Xcel has the energy monopoly in our region). I'm on a sustainability committee for our department and one big thing on our wish list is to convert some portion of energy from one (then more) of our buildings to solar. There are a number of smaller items on the list that are already in place. This meeting was the first in what will probably be many meetings to begin to understand how to determine what we need, that is, where we can offset coal energy where it will be most cost-effective (most experts have already told us that the most cost-effective solution is reduction/conservation), e.g. solar hot water for showers, dining halls, etc. We are already on our way to going to cold-water wash in our laundry rooms (my idea), although that turns out to be trickier than you might guess, ironically, for newer, more energy efficient models.

The guy we spoke with was very encouraging about us being able to get money, matching or grant, for the size project we might be looking at. He threw out a bunch of numbers with KWs and MWs attached and other big words that made my eyes glaze over, but between the unintelligible stuff he said that their company has been mandated by our state to fund renewable energy.

Today I got a call-back from a guy from a non-profit that helps put people/institutions together with manufacturers, funders, etc to get these types of projects realized. We talked for an hour and he gave me even more encouragement that this type of project is not only doable but that we might get more help and expertise and maybe even money than we need! Not only that, but come to find out through conversation that Cat, who provided us with the vision of skinny-dipping in the Big Muddy, has worked closely with him on videos for their organization and she is one of his favorite people!

Another option he wanted us to be aware of are solar tubes that are a combination of a skylight and those little solar garden lights . They are installed in your roof/ceiling and then shine daylight-quality light into the house, even at night! These are only good for upper floors, obviously, but they only cost about $500 to install, so would be a good alternative to CFLs, even.

Then we started talking about electric cars. Xcel (at least) has this hush-hush program where they are making electric cars that can charge from a solar source but whose battery can also store energy that can be drawn on from in times of energy need. It's still in the planning stages, and my guess is they won't release any information about it until they can figure out how to charge users for drawing from their own energy source. Oops, I'm not supposed to let cynicism creep into this . . .
moving right along.

So, in a perfect world, each household and business will harness its own alternative source of energy, use it to power our cars, and in times when the house (for example) needs an additional boost, we don't go to the energy grid, we go back to our car for that extra boost! I intend to use this piece of information in a letter to the editor about why we shouldn't even be talking about off-shore drilling, etc. That should be posted here next week.

What do turkeys and petroleum have in common? Read the top 10 list below to find out!

A Perfect World - Day One

I have been very disheartened lately over the state of the world. I fear it's effecting my ability to believe in goodness, magic and abundance of spirit and prosperity for humankind. Upon hearing this, a friend gave me an assignment: Write what a week looks like in the kind of world I want to live in. I don't feel terribly inspired (surprise!) so I'll be drawing from outside sources.

Justice for the American People:

Slate's interactive guide: Who in the Bush administration broke the law, and who could be prosecuted?

"Despite the lack of oral sex with an intern, the past seven years have yielded an embarrassment of riches when it comes to potentially prosecutable crimes."

The first entry of the week is a really cool interactive diagram (you can see the launch button but in case it doesn't work go to the Slate website) that list the crimes of BushCo, such as warrantless wiretapping and DOJ hiring (based on political affiliation), shows where they overlap and gives details on the crime and the cases for and against the prosecution. Looks like Grinnin' Abu Gonzales is smack dab in the middle! I'll be grinnin' too when and the Bush posse gets sent to the pokee.
Posted by Mosassy at 1:42 PM 1 comment: 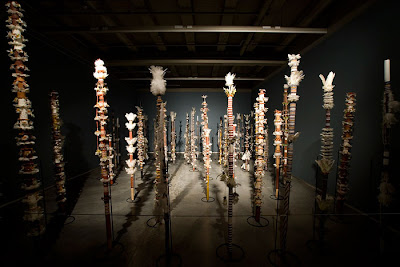 Gifts from one aboriginal tribe to another. These are not old, they were made in early 2000s. I wish I could describe how it felt to be in the room looking at them, it was very moving. They are individually made using hair, feathers, string, found objects, and represent a story of a journey of the bearer. There's a pretty good video and explanation on YouTube, wouldntchaknowit.
Posted by Mosassy at 1:39 PM No comments: