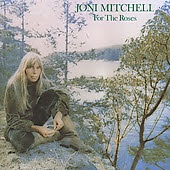 About 28 years ago, 1979 give or take, I was living in Pullman, ostensibly attending Wazzu but really doing most of my learning outside the classroom. I was djing a campus radio show - I can't remember what kind of music, probably just a mix of pop. The guy who was on before me played a lot of 60s and 70s folk rock, you know, Fairport Convention, John Lennon, Dan Hicks, Grateful Dead and Joni Mitchell. I had never heard of her. I mean, I recognized some of her hits but I wasn't a Joni zealot -- yet. The guy let me play some of his albums on my show, and within weeks we were swapping music and life stories - stories of our lives up until that point, of course. I was all of 21. The guy became my very good friend and sometime lover George C.

George was from New York and had that great accent that makes a guy sound seasoned, jaded even. He was (is) really smart and thoughtful and interested in what I had to say. We'd spend rainy afternoons reading to ourselves or each other, drinking chamomile tea, listening to Colin Blunstone or John and Yoko's "Double Fantasy" and Joni Mitchell. "For the Roses" echoed my youthful introspection and insecurity and we'd set the record player to repeat so it played over and over and over and over. John Lennon hadn't been killed yet. I hadn't begun to see the inequities and atrocities of the world yet. But just because the scales hadn't fallen from my eyes doesn't mean there wasn't any pain. Of course there was, like when I almost slept with his best friend at what I thought was his approval. That was a year later and George played me like a yo-yo, wanting me one day then repulsed by me the next.

At my summer job that year, working in one of the academic offices, included making copies of assignments and tests on a mimeograph machine. Remember that smell? I don't remember if I had recording capabilities, whether I was able to make copies of George's records or not, but I know I bought several of those albums for my own music collection. Twenty-eight years later, maybe even to the day, I just burned a copy of my new cd of Joni's "For the Roses" for a fellow Joni zealot, whose birthday is today.

Of course, now I can Google "joni mitchell for the roses," upload an image of the album cover, get the lyrics, buy it with a couple clicks and have it shipped to me or to anyone else in the world. Maybe I should send it to George.
Posted by Mosassy at 3:53 PM No comments:

The books by my bed stand or in the back seat of my car or in my hand bag are Andre Codrescu's "New Orleans, Mon Amour," Salinger's "Nine Stories," a compilation of literary journalism (to get a jump on my fall class reading), "Blessed Unrest" by Paul Hawken, Maureen Dowd's "Are Men Necessary" and one my mom just sent me called "Palace Walk," whose author won a Nobel for literature. I tried to start James Joyce's "Ulysses" but couldn't get past the first page.

The one that is most immediately holding my interest and giving me hope is "Blessed Unrest." Hawken is one of the founders of "Smith & Hawken," which started as a "green" company selling "green" goods, but I don't think he owns anymore interest in the company. I'm not sure where they stand now in terms of earth-friendly products. I wouldn't be surprised if S&H had some of their products made by 12-yr-old indentured servants in sweat shops in China. There was a story on mpr this morning about a family who went a year without buying anything that came from China, but I digress. Or do I?

The complete title of the new book is "Blessed Unrest: How the Largest Movement in the World Came into Being and Why No One Saw It Coming." It's from a quote by Martha Graham that refers to artists restlessness, I guess: "There is only a queer, divine dissatisfaction, a blessed unrest that keeps us marching and makes us more alive than the other." Hawken used it to talk about the one, maybe two, million non-governmental organizations active throughout the world addressing poverty, globalisation, imperialism, peace, climate change and other environmental issues.

But after spending years researching this phenomenon, including creating with my colleagues a global database of its constituent organizations, I have come to these conclusions: this is the largest social movement in all of human history. No one knows its scope, and how it functions is more mysterious than what meets the eye. What does meet the eye is compelling: coherent, organic, self-organized congregations involving tens of millions of people dedicated to change.

I'm only 87 pages into it but so far he's given a history of the environmental movement and explained connections between the social justice and environmental movements, including the influence of Ralph Waldo Emerson on Henry David Thoreau, the influence of Thoreau on Mohandas Gandhi and the influence of Gandhi on Martin Luther King, Jr. I got this book from the library, but I think I'm going to buy several copies to give as gifts to friends who might need inspiration - I know I need an attitude adjustment when it comes to my world view, and I think this book is helping.

If you want to hear/read/watch Paul Hawken talking to Amy Goodman about his book and the "largest movement" no one saw coming, you can do so on her website.

We are enjoying some fine weather this week, after several weeks of above normal temps, mostly in the 90s. Because it was no longer too hot to be outside on a ladder, I got back to my painting project earlier in the week, but then have spent the rest of the week getting the inside of the house in shape for weekend company.

I'm painting my house a yellowy orange with white trim. Mexican-inspired. Needless to say, here in Minnesota, the land of white houses - or, the most daring, pastel-colored - it will be turning some heads and getting some eyeballs rolling. When I say I, I mean me, by myself. On one of the smaller sides, the one facing the backyard and garden, I had some help with the primer coat by some very generous girlfriends. Pat thought he'd hit the jackpot with an all-girl painting crew. But the next sides will be all me.

On one of the long sides I want to paint a mural, for which I hope to have help from my friend and neighbor who's an artist and whose painting I have hanging on my living room wall. I'm thinking something like this, one of the many colorful murals of the expat town of Ajijic, on Lake Chapala, south of Guadalajara: 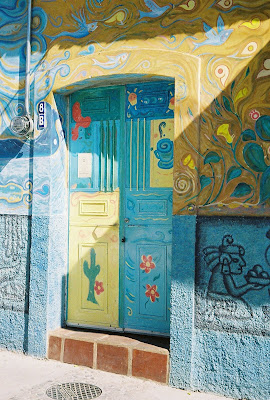 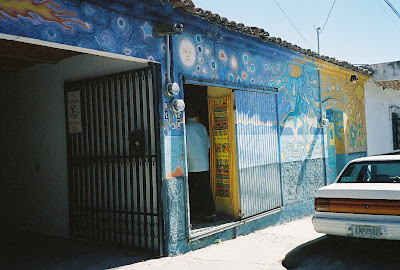 Practically the whole town was covered in murals. Here's a few more: 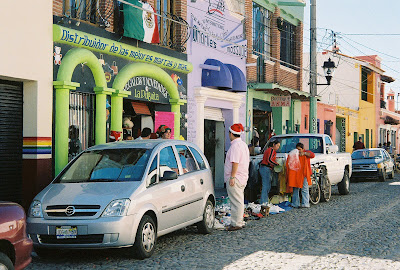 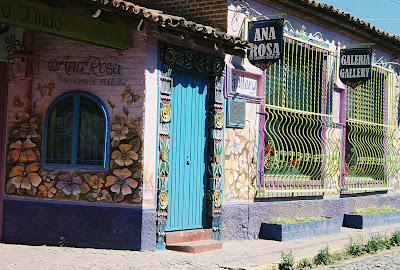 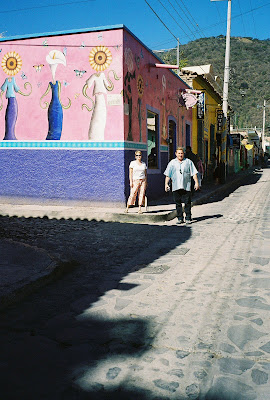 That's me 'n' Pacho in the last one. The smaller pueblo, San Juan Cosola, the retirement home of some of Peter's LA friends, was more a "real" town, just as colorful but not as polished. 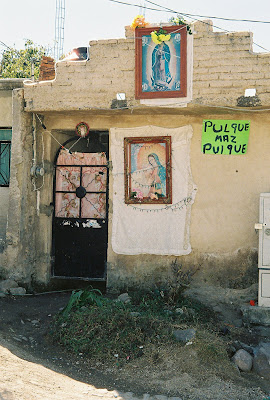 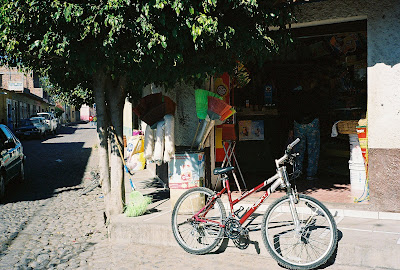 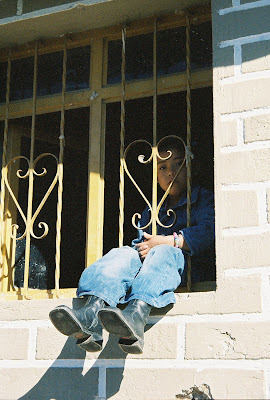 You're probably wondering about the "happy butts" in the title, right? You must go to see the TOTO website. This is the website of a Japanese company that has upgraded the bidet.
Posted by Mosassy at 9:51 AM No comments:

My friend Peter, who is called Pacho in Latin America and who refers to me as his "equis esposa," met me in Mexico City last December where we had a couple good meals, visited the Blue House - Fridha Kahlo's estate - and witnessed some bizarre street, or rather, subway, theatre: A young man, maybe 16 or so, squatted on the floor of a subway car. He was only wearing cut off pants, so was barefooted and shirtless. Although I speak Spanish, I didn't understand his rantings as he laid out a piece of cloth that contained shards of glass. He swept the shards into a small mound with his hands, then threw himself backwards onto the mound. When he rose I saw that his back was slashed with white scars and red cuts. He put out his hand for money as he passed through our car and onto the next, where he repeated the performance.

I still laugh when I remember the look on Peter's face, the pinched look of shock and disgust on the face of a man who has practically seen it all, lived and traveled all over the world, and has had enough notable and weird experiences to fill many books (one of them, I am assured, will mention me). When I met him he was living in the house rented by an old middle school friend of mine in Hermosa Beach, scraping by on his silk screened t-shirt business. During a time while I lived in New York and flew for Pan Am, he lived in East Berlin - this was before the fall of the wall - and ran with a revolutionary crowd and, if I remember correctly, produced a literary or political 'zine. After many years in the states he returned to Oz and got his barrister's license and now works for, among other things, aboriginal land rights.

After several days in Mexico Peter went on to Cuba for a three-week visit. I had originally planned to go along but after hearing a news report about secret service agents waiting in Mexican airports to catch Americans returning from Cuba I thought better of it. Peter had been telling all of us he was going to make a record while in Havana, and damn if that isn't exactly what he did.

To listen to a new voice interpreting some old Cuban standards and read about the famous Cuban band that helped it happen, go to http://www.myspace.com/pacho11.
Posted by Mosassy at 10:11 AM No comments: