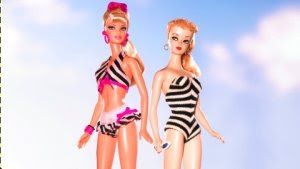 Barbie and I are the same age. We both turn 50 this year. I don't generally find kinship with Barbie, believing her to be an anti-feminist symbol that promotes the objectification of women as pretty, plastic play things with little substance. But what kind of feminist would I be if I judge a girl on her looks and reputation alone?

So I considered a less superficial characterization of Barbie and compiled a list of attributes that Barbie and I share. We were both born blond but appreciate the freedom to change our hair color whenever the mood strikes. We have flashy convertibles and love the beach. We are independent-minded and have changed jobs many times in our lives, always following our aspirations for more meaningful, fun work. We have both been a teacher and flight attendant, among our many careers. We both love a party. We are fiercely loyal to our friends, counting some ex-lovers among them (Ken and Barbie broke up several years ago but still see each other casually). We have both traveled the world and speak a few foreign languages. We don't cook or do our man's laundry.

But here is where I still have a problem with Barbie: She has remained wrinkle-free for half a century, while I have not. I have tried just about every product known to woman to slow the inevitable decay of the flesh, but the wrinkles keep multiplying. When I was in my 30s, I believed by 50 I'd have moved beyond the superficial and not care what I look like. I also believed in my early 20s that nobody in their right mind would want to live beyond 30, when they would sell out and become part of "the establishment," so there you go.

It's not like 50 hasn't forced on me more practical concerns. I have to stretch every morning before I can stand upright. It's impossible to relax my hips in downward-facing dog while trying to clench my butt cheeks against my now-chronic flatulence. Even the sub-zero Minnesota winters can't cool my frequent hot flashes. But the wrinkles are what keep me up at night.

The first wrinkle treatment I tried was something I found in a book of natural beauty secrets. It had me heating a spoon under a hot water tap, dipping it in olive oil, and "ironing" my forehead and around my eyes and mouth. I was 19 and didn't have any wrinkles yet, but that didn't stop me. I started wearing sunglasses when Reagan became president, not because those Foster Grants made me look like a movie star, but because they would keep me from squinting, keeping the crow's feet from creeping in.

In the past 30 years or so I've been bamboozled, as my husband puts it, by every huckster selling anti-aging miracles. I'm a sucker for infomercials with celebrity endorsements of skin care lines that promise to restore that coveted youthful appearance. When channel surfing between PBS documentaries, if I land on such an infomercial, my husband switches channels and hides the remote and credit card. I have tried umpteen skin care lines, all touting their miracle ingredients: albumen from bird eggs, squalane from deep sea sharks, ionic stimulation, the miracle make-up secrets of the stars.

When I heard Paul Newman's secret to gorgeousness was washing with cold water, I incorporated that into my cleanse-tone-moisturize routine. I can't remember where or when I heard about facial exercises, contorting into all manner of convoluted expressions to firm and tone the skin and muscles of the face, but I do them while driving -- without shame. I take vitamin E daily. No, not to enhance my sex drive, but for the antioxidants that fight the free radicals lurking out there, invisible, gunning for my skin. There are antioxidants in red wine, too, so I make sure my diet contains plenty of that.

There are some things I won't do, though. One of my girlfriends uses tape to keep wrinkles at bay. She puts pieces of stiff brown packing tape between her brows and near the edge of her eyes to keep creases from forming there while she sleeps. OK, I admit I tried it once, but the tape just ended up on my pillow.

I know it boggles the mind that a reasonable woman would spend so much time and money combating the inevitable. Come to think of it, worrying about wrinkles is probably self-defeating. Not to mention the contradiction of a self-proclaimed feminist buying into the mainstream culture's obsession with youth and beauty as a valid measure of self worth. But I will not be deterred. Barbie knows the secret to vanquishing wrinkles, and, damn it, I'm going to find out what it is.
Posted by Mosassy at 4:49 PM No comments: