Party With A Purpose

(This was originally posted at NEED Magazine on Oct 2

“Masala” is a mixture of spices, a staple of Indian cuisine. Masala Jam is a spicy blend of musical talent that will take the stage at Gluek’s Bar in Downtown Minneapolis on October 13 to benefit street children in India.

The hot list of performers includes the smooth jazz and R&B of Wain McFarlane and Friends, reggae from Ryan Liestman and Ipso Facto, and gospel and soul from JD Steel. Internationally-renowned guitarist and composer Billy McLaughlin will toss in some acoustic zest. The sultry vocals of George Scott McKelvey, of Rhythm Jones fame, will sweeten the lineup. Shawn Douglas, Brian David Band, Michael Wright and many others lend a hand in the cooking of this spicy blend of entertainment.

Masala Jam will benefit Care & Share, a foundation dedicated to giving “children their childhood back” by helping to alleviate the devastating effects of poverty on orphaned and street children, in Vijayawada, India. Care & Share supports three children’s villages, where nearly two- thousand orphans are schooled, clothed, fed, sheltered and nurtured in a loving community. The kids can stay active with skating, biking and soccer that are also on offer at the facilities.

Care & Share receives funding mostly through child sponsorship. Sponsors donate a dollar a day to an individual child, and develop a familial relationship through correspondence with the sponsored child and organization. “Every penny, except for some flyers and mailings, goes directly to the kids,” says Julie Roberts, U.S. director for Care & Share. Two hundred children are sponsored by Americans and 5,000 by citizens of Italy, with the need growing everyday, as more and more children are now losing their parents to AIDS. 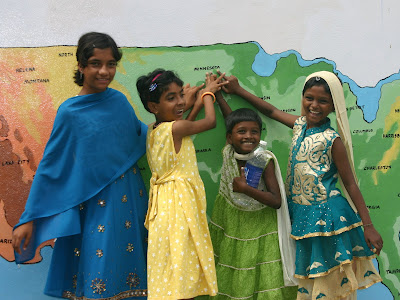 Daddy’s Home, the original of the three villages, is “the most joyful place I’ve found in India,” says Roberts, a Northwest pilot. She was a volunteer for 10 years before taking her current position with the organization, based in Venice, Italy. She said she was depressed each time she visited India by not being able to make a difference in the wretched lives of thousands of street children who suffered from malnutrition, neglect, abuse, and prostitution. Once she discovered the village, she committed fully to their work, sponsoring seven children and adopting two into her family.

In addition to the villages, which employ many villagers, Care & Share brings milk, food, medical care and education into the slums of Vijayawada. Approximately 30% of the population of the city lives in the slums, lacking hygiene, sanitation and clean drinking water. The organization estimates it provides 5,242 meals a day to the children in their care, as well as those living with their families in the slums.

Last year, the usually-reliable monsoon season never materialized, causing widespread drought. This has lead to food shortages and hiking food prices. “We’re in a panic. You can’t just have all these kids relying on you and say ‘sorry, no food,’” says Roberts. Masala Jam is a response to the call for immediate help to buy food.

Wain McFarlane, who is helping organize the benefit, said when he found out about the tragic lives of the street children, he had to take part. He said it’s important to help save these children, many of whom were living like slaves for “bad guys with negative interests” before being taken off the streets by Care & Share. “I expect it to be an incredible night of music that will set your soul on fire, and for a great cause.”
Posted by Mosassy at 4:53 PM No comments: