Melbourne surprised me. After flying for about 22 hours across an immense ocean and crossing the international dateline, 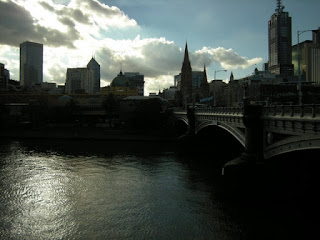 I was a little disappointed by how familiar it felt. Indeed, exiting the airport we passed a McDonald's and a Holiday Inn. Except for the fact that we were driving on the left side of the road, the locals were speaking English (albeit with sexy Aussie accents), and streets and strip malls in these outskirts resembled those of Bloomington or Maplewood.

As you arrive in the heart of Melbourne, however, the foreign-ness begins to seep in. It has been said of Melbourne that it has a European character, which is borne out by the wide boulevards, city parks and gardens, and the multitude of outdoor cafes and world-class restaurants, to which smartly-dressed Melburnians flock on their two-hours lunch breaks. But the architecture also lends to the suspicion that you bought a ticket to Australia but somehow

landed on the other side of the globe, say, Amsterdam or Antwerp. Victorian, Italianate and Gothic buildings blend easily into the skyline next to more modern Art Deco and late 20th century styles.

Melbourne sits on the lips the Yarra River (pronounced "Yerra," like "terra" as in "terra firma"), on Port Phillip Bay, at the southeast tip of Australia. Although there were earlier attempts at settlement, it didn't start booming until the mid-1800s, not even 200 years ago. It grew bigger than Sydney around 1865, thanks in part to a gold rush. For a long time thereafter, Melbourne was considered the commercial and cultural heart of Australia. Sydney didn't regain the title until the 1970s, I believe. The current population of greater Melbourne is 3.5 million, a little bigger than the Twin Cities (2.8) and increasing everyday.

The Yarra River runs along the south side of the Central Business District (CBD), and the south bank of the river is lined with glitzy shopping malls and restaurants with outdoor cafes spilling onto the quay in the precinct of the city called "Southgate." The outdoor cafes all over Melbourne are not improvised, either, to accommodate a smoking ban. They were established on purpose; many feature a glass wall separating the sidewalk tables from the street, so you can enjoy your meal al fresco without also ingesting the fumes from passing cars.

Because we arrived in early winter, the tourist count was as low as the sun; the days were short and the shadows long, lending drama to the scene. The temperature was much like it was when we left Minnesota, mid-to-high 60s. Great walking weather -- tropical compared to the protracted winter we'd just suffered through -- yet Aussies were clad in jackets and scarves, and some even wore mittens.

What we refer to as neighborhoods here, Melburnians call suburbs, so Nordeast or Cathedral Hill would be considered a suburb. They call only the central city "Melbourne," and give the suburbs their own names like "Middle Park," where my friends Marlys and Matt are living, "St. Kilda," from where this picture of the Melbourne skyline was taken, and "South Yarra," the location of a market, ala Pike's 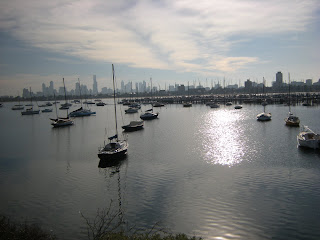 Place, which supplied our picnic for a day trip to see the kangaroos and koalas.

You can get just about anywhere using the network of trams and buses. Matt and Marlys have a car but seldom use it, relying on bicycle and tram commuting, respectively. Within Melbourne proper are various smallish "precincts," such as "CBD," Southgate and "Chinatown" (which would be more appropriately named "Asia Town," reflecting the blend of Korean, Japanese, Chinese and Thai restaurants we saw in that area). In a city of abundant and varied food choices, I am told that the best Chinese restaurant in the world --outside of China, of course-- is located in Melbourne's Chinatown, and costs about as much as a trip to China to eat there. On the tram and on the ever-busy streets of Melbourne, I overheard locals speaking French, Chinese and another Asian language I couldn't discern, Russian and some other Slavic language.

We didn't get a chance to sample much of the gastronomy during our visit, but we did indulge in the ubiquitous pub fare called "parma." Parma consists of a breaded and fried chicken fillet, doused with marina sauce and smothered with mozzarella, served OVER fries, and variations on that theme. Maybe a side of salad or coleslaw, but who could find that over the mound of parma that inhabited most of the plate? Pubs are called hotels and often have rooms to rent or apartments above. Draft beer -- GOOD, high-alcohol, locally-brewed beer -- comes in two sizes, a pot or a pint (in Australia, beer is NOT called Fosters). Burgers, according to the menus, are always served with lettuce, tomato and a slice of pickled . . . beet. Anything served with BBQ sauce is considered "American style."

And the wine! Australians have a lot to boast about (and they do): good beer; world-class cuisine; miles of rugged coastline and crystalline beaches; seven of the world's nine deadliest snakes; a gritty convict history; aboriginals -- who have the oldest (60,000 years!!) human culture on earth (and whose art and spirituality are deep and beautiful, but that's another story for another day); Uluru (aka Ayers Rock); the Great Barrier Reef; but holy crap, the wine! There seem to be vineyards everywhere. We took a day trip to the Yarra Valley, about an hour's drive east of Melbourne, to visit a wildlife sanctuary. We got to see, up close, animals that are native only to Australia, including the platypus, koala, Tasmanian devil, emu -- which kind of belches like a beer-swilling trucker -- and a lyre bird, which not only has beautiful tail feathers it displays, peacock-style, to woo potential mates, but also mimics the songs of not only other birds but anything it hears, like cell-phone rings or jackhammers. 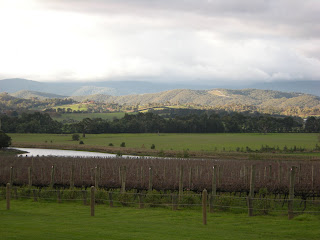 The region produces excellent cool-climate wines (Cab, Chard and Shiraz), and we drank some table-priced wines that were yummy, rich and complex, for which I suffered a little the next day for having over-imbibed. All the wine bottles we saw were screw-tops. Screw-tops limit the wine's susceptibility to spoilage -- and eliminate the bother of bringing a cork-screw to the picnic! I have seen a few French wines go screw-top, but no Californians as of yet, progressive as they profess to be.


Anything that isn't in town is considered "the bush" and kangaroos really do abound there (no pun intended). 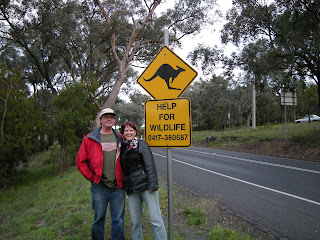 The city is clean and the parks lush and well-manicured, and there's not much litter to speak of. "Help keep Melbourne a Butt-free City" was one of the ad campaigns featured on the trams. Australians, despite their convict/pioneer origins, live under tight laws and restrictions. Despite the fact that their national folk hero is outlaw Ned Kelly, a murderous bushranger, something like our Jesse James, guns are prohibited. No smoking is not allowed in any public building in Australia, either. There was a drug-sniffing beagle making the rounds at the baggage claim when we arrived and a German shepherd at immigration when we departed. Our bags were riffled thoroughly by gloved security guards looking for contraband. They have a reality TV show about this that is very popular, I'm told, aptly named "Border Security," an Aussie-style "Cops." The border guys were very polite, though, while they were going through my delicates, unlike the brutes on "Cops." In fact, Aussies were really nice all around.

The Aussies I've met in Oz and elsewhere are mostly laid-back and fun, and good for a bender if you're up to it. They are well-educated and all the school-aged kids wear a uniform to school -- so quaint! They are well-traveled, getting at least a month or so vacation each year, and are encouraged to take extended sabbaticals for travel as a kind of ambassador program, I think I read somewhere.

Traveling with my husband and having friends in the region, I didn't get much chance to have random conversations or hang out with many strangers, but we did meet several Aussies via our in-town friends. The first question was "Is America going to have it's first black president?" They wanted to talk politics, and wanted to know the likelihood of a President Obama. I hope I left those I spoke to with the impression of Americans as intelligent, thoughtful and not as misguided as would be assumed, given the fact that W was "elected" not once but twice (I quickly put this assumption to rest by explaining those elections were stolen and/or manipulated by fear) and for leading the world into an immoral and unjust war. They are a little pissed off about that war.
Posted by Mosassy at 11:06 AM No comments: