A new day in America 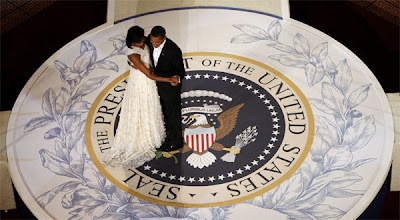 January 20, 2009, was a momentus day for us all. About a week ago a friend from the Tavern said he was planning a little party at the Muddy Pig, and had convinced owner to open early enough for a small crowd of us to watch the inauguration. Since election night was somewhat anti-climactic for me, I was excited for the chance to proudly watch our new president be sworn into office in a more celebratory atmosphere. When those plans fell through, I started searching the web for other locations to watch where I might also enjoy the fellowship of joyful citizens. As of yesterday morning I thought I was going to be watching it at my desk when I received the Secrets of the City daily email with a list of the days events around town that included the notice that The Bulldog would open early for us anxious Nordeasters.

I approached the door at 10:35 and asked a staffer who was going back inside after her cigarette break if they were open. "Nah, but we're letting people in anyway. Just drinks, though, until 11:00." Inside, the place was sparsely populated with about 10 people, situated at tables and angled to best take advantage of one of the seven large, flat-screen tvs that circled the room. I pulled out a stool at the bar that was, so far, vacant. I exchanged some frets about not having enough quarters for the meter with the black man who entered behind me. We each got change, fed our respective meters, and then bellied up to the bar side by side. More people came through the door, filling up four-tops and bar stools. The man beside me said, "I hope you don't mind if I sit here next to you." I responded, "I'm glad you did. That's why I'm here. I didn't want to witness this alone." He introduced himself as Earl and apologized in advance for getting emotional. "If I start crying, don't think I'm a wimp. Don't be surprised if a few tears start falling down my face." I nodded and said I was feeling pretty choked up myself.

By the time the first and second families began to make their way through the adoring throngs to the podium where they would be sworn in, there were about three dozen people settling in, ordering drinks, and getting ready to toast the new administration. When Obama pledged to uphold the constitution, the bar was packed as a Friday happy hour . . . and dead silent.

The mostly white, mostly Gen x and Baby Boomer crowd remained quiet, rapt with attention and awe while Obama gave his inaugural address, applauding when our new president said things like, "Today I say to you that the challenges we face are real. They are serious and they are many. They will not be met easily or in a short span of time. But know this, America - they will be met. On this day, we gather because we have chosen hope over fear, unity of purpose over conflict and discord.

On this day, we come to proclaim an end to the petty grievances and false promises, the recriminations and worn out dogmas, that for far too long have strangled our politics." The camera was turned on Bush at that moment, and I think I saw him slink down in his chair.

I don't think I heard ever word of the speech. My head was filled with the awesomeness of the ocassion and my heart was brimming with pride and joy and love and hope. Then came is closing words:

"So let us mark this day with remembrance, of who we are and how far we have traveled. In the year of America's birth, in the coldest of months, a small band of patriots huddled by dying campfires on the shores of an icy river. The capital was abandoned. The enemy was advancing. The snow was stained with blood. At a moment when the outcome of our revolution was most in doubt, the father of our nation ordered these words be read to the people:

"Let it be told to the future world...that in the depth of winter, when nothing but hope and virtue could survive...that the city and the country, alarmed at one common danger, came forth to meet [it]."

America. In the face of our common dangers, in this winter of our hardship, let us remember these timeless words. With hope and virtue, let us brave once more the icy currents, and endure what storms may come. Let it be said by our children's children that when we were tested we refused to let this journey end, that we did not turn back nor did we falter; and with eyes fixed on the horizon and God's grace upon us, we carried forth that great gift of freedom and delivered it safely to future generations."

The bar erupted in whoops and applause. Everyone raised their drinks and clinked their neighbors or held them up in a cheers gesture to folks not within their reach. Smiles and tears flowed in abundance. Then the normal hubbub of bar chatter took over as everyone turned away from the tv screens and engaged with their companions. A table of about 8-10 boomers with greying hair donned floppy red, white and blue Uncle Sam hats. Blue metallic pointed party hats appeared on other revelers, and I'm pretty sure I heard a noise-maker or two honk above the din.

A couple had taken seats at the bar to Earl's left. He introduced himself and found out that they had take the day off to celebrate the event. I asked the bartender, John, whether they were prepared for this many customers, if they were usually this busy on a Tuesday. He said, no, not on Tuesday. They had opened early on purpose but didn't really have enough staff. He said there were people waiting inside the empty bar when he arrived to get the bar set, the manager having let them in when she arrived much earlier. "Do you think most people are here to watch the inauguration?" I asked. "All of them," John said emphatically.

Some time later, when the Bush's stood waving on the stairs of the whirlybird that would whisk them from the White House lawn, the bar crowd huzzahed and hollered "good riddence" and let their own big middle finger birdies fly! John flashed a crooked grin and said, "I think that got a bigger reaction than Obama's speech!"
Posted by Mosassy at 11:29 AM No comments: 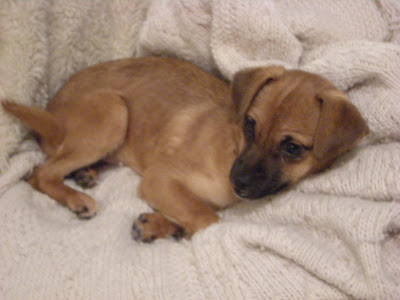 Opie is our new puppy, my first dog. I didn't think I was a dog person, but Mason convinced me otherwise.

Sometime after Mason left, we fostered a little pug, whom we called Betty. She was really sweet and funny and cute, and we really loved her, but I couldn't get my mind around having a dog full-time. But after 2 weeks the only reservation was that my neighbor and friend, Anne Marie, is highly allergic to animals. She can come into my house for short periods, but if we were to add a dog, she would not be able to come in at all. She was in a house with a dog and cat recently and her throat swelled up and she lost her voice for 2 weeks. Her allergist confirmed that it was allergy-related. So I was really torn about making a decision that would keep her out of my house permanently. I even had a talk with her about it on the day Betty went to meet a potential family, before I knew that was my last day with her. She just laughed and said, "of course you wouldn't base your decision on me" but that was really weighing heavily on me. 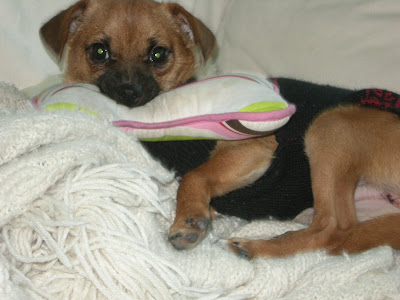 Once Betty was gone to her permanent home (with a new big sister, another pug named Emma, so that helped me to feel like it was the right thing), I missed her like crazy. I was literally pining for her for several weeks. During that time I was talking about her to another friend, who told me his mom had 2 pugs and, yes, they were all that sweet and cuddly. I think that's when the deal was sealed. I got online and started searching the rescue websites for a pug, and I found a pug-terrier cross. I emailed the foster mom and found out that he was calm and good with cats (which, I understand, most fostered dogs are), and she had me fill out a pre-adoption form. Then we went to meet him at a pet adoption event at the nearby PetCo. There were dozens of dogs and even more people crammed in their parkas and boots, filling up the joint. I found him immediately and we held him and walked around with him; he was quiet and still and didn't seem scared but probably was overwhelmed. And when Pat started crying at the sight of all those homeless dogs I knew I wasn't going to be leaving without Opie. Learning that Opie was found with another puppy in a recycling bin by the garbage of a "humane" didn't make it any easier to leave him behind. 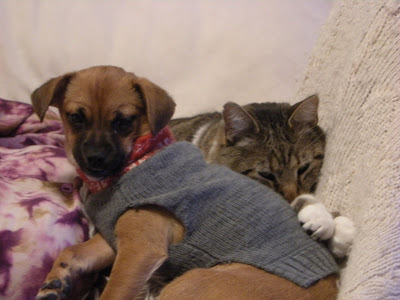 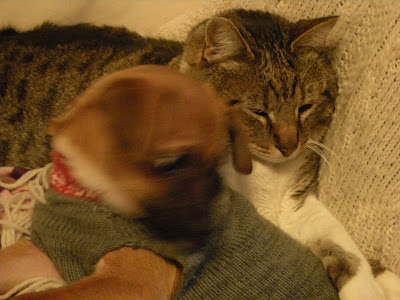 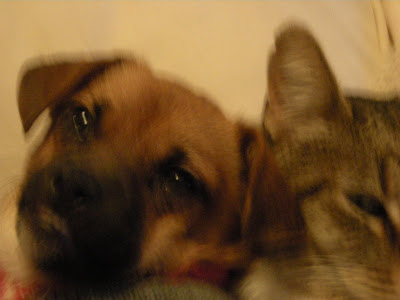 There's some conflicting information about his age. We heard 8-10 months, 3-4 months and 9-12 months. He just lost a baby tooth, so I guess that makes him young yet. But he is already neutered, has had most of his vaccinations, and we are trying to get him into a potty-training routing. Some luck with that, but also some "accidents." We are pretty happy with him, although it's still scarey to think about having all that responsibility. Cat's are so easy by comparison! I'm hoping that, with the terrier blood, he can avoid some -- if not all -- of the ailments that pugs are prone to.
Brothers

He sleeps a lot and is very cuddly, which from what I have read is a common pug trait. As he gets more comfortable with us he is getting more playful, too. He's already learned how to sit (for payment, of course). And when he was told repeatedly that he couldn't chew his rawhide on the couch he chose to leave it on the floor and chew on us instead. What a smart dog!

We've had him a little over a week now, and the rescue folks say they will be adjusting for up to 4 weeks. He hates being crated and cries and barks as I'm walking out the door in the morning, even though they also said that foster dogs are crated most of the day. I guess in a new home it all starts over for them. 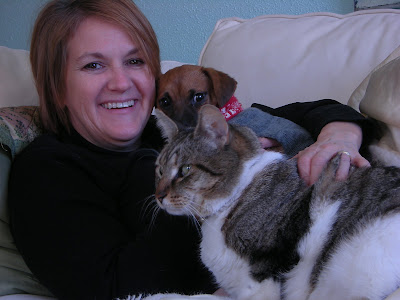 Posted by Mosassy at 2:39 PM No comments: