Lots of work and nothing to show for it

I know it seems like I'm just slacking, not having posted anything since forever. But really, I have been working my ass off in my magazine writing class (for which I got an A, tyvm). Besides the Barbie essay, I have written a profile of a yogi with Lyme Disease and a long feature (almost 3000 words!) on a Lyme support group in Forest Lake, among other tidbits. I am trying to get them both published, so they won't appear here until I know one way or t'other.

But suffice it to say I have learned a lot about Lyme Disease!

Here is a primer:

*Lyme Disease has been reported in every state in the US, and is the fastest-growing infectious disease in the country (maybe the world!)

*Black-legged ticks carry a spirochetal bacteria, a cousin to syphilis, that carries Lyme and other nasty infections.

*In Minnesota, 1 out of every 3 black-legged ticks carries the infections.

*Summer is Lyme season, so do your tick checks every day

*If you get bit, get to a doctor for some doxycycline (or similar) asap. Make sure you get at least a month's worth.

*The Lyme spirochete, Borrelia berdorferi, is the DEVIL. It can change shape and escape detection. It can infect every system in your body -- blood, muscles, tissue, organs, brain.

*Many people suspect it can also be passed to sexual partners, like its cousin, syphilis, but there isn't enough time or money in the world to do the research that would prove it.

*There is no guarantee that antibiotics will kill all of them. 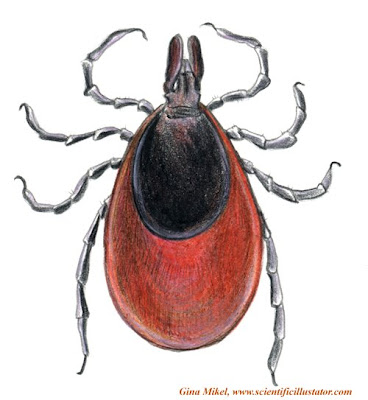 *Conventional wisdom would have you believe that a bull's eye rash is a sure sign that you have LD. That is not wisdom but a MYTH. Some people who contract LD don't get any rash, and they are not all bull's eye-shaped.

*Very few doctors know how to recognize LD symptoms because the symptoms mimic those of a lot of other diseases. But if you get a combination of any of these and you have been in tick habitat (which is almost anywhere these days), suspect LD.

*Prevention is the only guarantee - DON'T GET BIT!!

*There are products to repel and/or kill ticks before they can bite you. Use them!

Meanwhile, I've started an internship blogging for NEED Magazine. My first story -- possibly posted next week -- is about a guy who uses his rage at the ineptitude of relief organizations to fuel his own humanitarian/social justice efforts in the US and around the world.
Posted by Mosassy at 1:33 PM No comments: