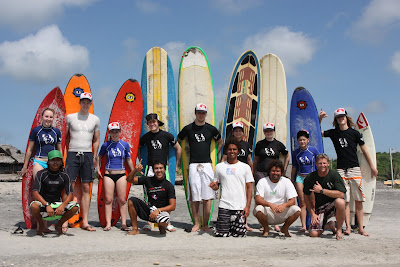 (this was first published at NEED on July 14)

Sam Bailey was surfing his way up the western coast of Peru last year, taking advantage of the warm waters and hospitality. Crossing into Ecuador, he traveled through many interesting beach towns in various stages of development, and arrived in the small town of Canoa, on the north coast.

Bailey noticed that tourism in many of the villages had been taken over by outside industry, where big companies had come in and set up hotels and restaurants without concern for the natural environment or local customs. The fishing village of Canoa, which also catered to surfers, was still unspoiled, with most roads still unpaved, and where electricity goes out every once in a while. It was obvious to Bailey that tourism was coming to Canoa, but he hoped he could help the villagers build their industry on their own terms.

His idea was to start a camp for college-aged students, where they could learn to surf and take on environmental projects. “Surfing is a solitary sport. Surfers don’t see beyond themselves when they return to the beach,” Bailey said. He wanted to change that dynamic when he approached one of the locals, Daniel Velasco, a town leader and fellow surfer who runs a posada (small hotel) in Canoa. According to Bailey, Velasco didn’t trust the idea at first, fearing it was another way to exploit the village. But Bailey convinced him that he was sincere, assuring him the groups would patronize locally-owned hotels and restaurants, spreading money around in the local economy. Also, each group member would donate money to the local grade school. Velasco agreed to introduce Bailey to the community and helped facilitate what became Eco-Surf Volunteers.

The school, La Escuela los Algarrobos (named after a kind of native tree) includes English as a Second Language and environmental education in their curriculum. At the school, the ES volunteers facilitate arts and crafts sessions conducted in English. Moya Foley, the school administrative and financial director, a Canadian who has lived in Ecuador for 30 years, said the financial donation helped complete some construction on two new classrooms, and the volunteers “worked their butts off moving dirt, sanding, painting and generally doing whatever we needed done.”

In addition to helping out at the school, the volunteers lead the village children on beach clean-ups, to “get ahold of their attitudes about clean-up” early in life. The volunteers’ hard work – about four hours a day – is rewarded with two-hour daily surf lessons, given by locals. “I think the most important thing the volunteers talk back to their countries as an experience, is the cultural immersion they have and the contact with the community ,” said Velasco. He was particularly satisfied with the impression the volunteers made on the village children. “To see the volunteers working on the school activities and watching them as they walk to do beach cleanups, and collecting garbage on the street . . . they are used to seeing tourist partying or laying on the beach reading, maybe getting a wrong idea about life, but this way they can understand that life is not about that.”

The programs have been a big hit with the kids. “The first day we had about 20 kids and on the last day we had 90!” said Foley. They are “looking forward to the volunteer’s return. They stop me on the streeet, the older ones, and ask me when they are coming back.”

Bailey is planning several more camps through 2010, but envisions the people of Canoa eventually taking over operation of the camps themselves. “The town is still discovering what is needed. They want progress, but want to do it in a careful way. Their biggest concern is developing the tourist industry while maintaining cultural identity.”
Posted by Mosassy at 12:10 PM