The MPR meteorologist said this morning that we are in the middle of a polar vortex. That's why we're still in the deep freeze. It's bloody March, a couple weeks shy of the spring equinox, and temps are in the single digits again. Because the temperature has remained cold, despite low snow fall this season, we have kept a constant snow cover for the three months of winter, the first time in 11 years. And it looks like that trend will continue for the next several days.

While we've been cooped up inside (and, mind you, I am what Garrison Keillor calls an "indoorsman." I don't mind hanging at home most of the time), there's been a writers strike, so nothing but reruns on tv. So if you're a tv watcher, you end up watching shows you never used to watch (mostly because they didn't interest you in the first place) to see something besides reruns. That, or you watch really OLD reruns.

Last night I watched three shows I formerly eschewed. The first was American Idol. I've been watching that a little more than I ever have this season, partially because there's nothing else on. But another reason might be that there some pretty cute boys on this season, and a couple are even openly gay (or should be). I doubt I'll keep it up past spring. The second show I watched was one of those crime-profiler dramas, the one starring Mandy Pantinkin and, last night, featuring Alyssa Milano. That show is probably part of the Law & Order franchise, which I loathe, mostly for its glib one-liners. Both those shows I watched with tepid interest, dipping back into my book throughout.

The third show, the one I watched with enthusiasm and delight -- which when it originally aired I didn't watch and never would have admitted to it even if I had -- was an early episode of Baywatch. This episode starred Kelly Slater as local surfing hero Jimmy Slade, who has since become the world surfing champion several times over (8!!) -- along with many other accomplishments. Turns out Kelly has quite the lengthy filmography, but that's another story. This is from a 1999 interview in Outside Magazine: 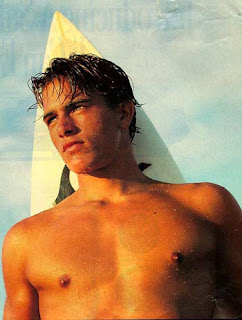 "All the stories were pretty stupid," Slater says, popping grapes into his mouth. "They showed me waking up in the morning in my van, and the sun is setting over the water, with an onshore breeze, when in the morning it's always glassy—ridiculous. Though watching myself and trying not to think of it as me, I thought I wasn't that bad." He glances over shyly, and then hurries on."But overall it inspired me not to act. Don't tell Bryan that."

Still, Slater says, "I begged to get off the show. The motivation was 30 percent me just wanting to be a serious athlete and 70 percent surfers saying, 'Slater made a mockery of surfing, there's no forgiveness, fuck him.' That hurt. In fact, that was probably 95 percent of my decision," he adds ruefully. His face firms up. "But I used that grudge against those guys to drive myself harder, and I won my first world title that year."

The episode I watched last night was one made in the early 90s, but the fashions are pure 80s: 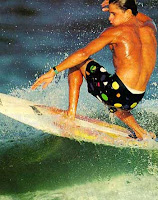 tanned, not-too-skinny girls wearing nothing but a bikini and thick white socks and sneakers, small waists and big hips, frizzy, over-teased hair, and glitzy, gaudy earrings. And men in short-shorts. The kid in the story, Mitch's son, Hobie, was stomping (rather, skating) the same grounds at about the same age as me when I lived there, way back in the early 70s: the pedestrian strand that separates the beach from the south bay towns of Manhattan, Hermosa and Redondo beaches. Those storefronts couldn't still be the same as when I was hanging around there, but they sure looked familiar.

What's a better tonic for a weather report that promises a bone-chilling weekend than an escape to the beach? Here's Kelly in action.

I congratulate you on your apt use of "eschew."