It's officially fall. The temps were in the mid-80s on Saturday and Sunday, then plunged to mid-50s on Monday. The sky is low and gray. I have hauled in my tropical plants - hibiscus, mandavilla, bouganvillea - from the deck. The rest of the scraggly potted flowers will be left to defend themselves against the windchill; I can never bring myself to rip them out of their soil and toss them onto the compost pile while any blooms remain. I've jammed my shorts back into the plastic storage container I keep under my bed and moved my winter pants back into my bedroom closet. I got a cute new fall jacket, a woolly A-line mid-thigh length with a big houndstooth pattern. I'm wearing socks again. Still, there are hold outs, stubborn campus denizens who continue wearing flip flops or sandals, capri pants, short-sleeved shirts, and go out without a jacket.

Yesterday on my run I spotted a small bird pecking around a boulevard garden near a busy corner. He didn't seem at all fazed as I approached, giving me the idea that he might be hurt. I reached under the plant he was rooting in and picked him up with on hand, then made a closed cup with both my hands while I studied him. He had the coloring of a female goldfinch, but with more of a green tinge, but he was not at all the same shape, being round like a golf ball instead of bullet-shaped, and he had a skinny sharp beak. Because of the red spot he had on the back of his head I thought he might have been injured, but the red was a real red, like a fire engine, not blood red. I set him down in the neighboring yard to see if he would run for cover in this safer spot away from the dangers of the street and he flew up into a tree. When I consulted my Audubon Society Birds of North America I found out he was a ruby-crested kinglet. The book said he probably is stopping off during his migration. I sure hope he finds some friends to hang out and eat with, because he sure was a tiny little bird, all alone in the big world. 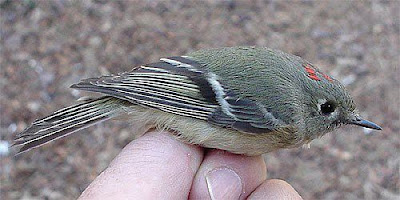 That is not my hand, that guy needs a manicure!
Posted by Mosassy at 4:28 PM