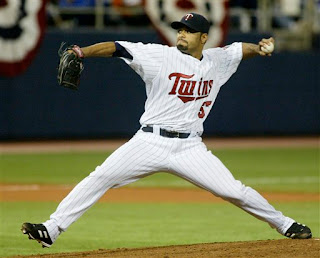 At the end of the day today Johan's trade to the Mets may be sealed. My heart is breaking.

I was an unapologetic spectator sports reviler for most of my life, eschewing parties (although I'm a devout partygirl) that centered on sports events, drawing the mistrust (and pity) of many of my friends. I didn't appreciate the athleticism and skill involved, but mostly I was appalled at the salaries and oppose any public money for teams via stadiums and the like. It wasn't until the summer of 2003, with nothing much on the tube on Sundays but baseball, that I discovered the joys of the great American pastime. It was the summer we moved to the Sugar Shack and I had a variety of house projects in progress. Our friend Dennis would come over on Friday eve to help and stay until Sunday, and we would drink and paint (or wallpaper, or patch walls, or break ground for a garden, you know the drill) and stay up late talking politics (arguing, to most people's ears, although we agree on everything but the fine points), and on Sunday he and Pat would want to watch the game . At first I acquiesced but with the sound turned down so I could listen to the Latin music show, Brisas Latinas, and dance while I continued whatever project was in the works that day. As the summer wore on, I got less able to resist the magnetism of the tube, and I started watching a little here and there with the sound on, while Dennis explained the pitching game. The more I watched, the more I wanted to watch.

Baseball fans will remember that was the year the Marlins, lead by young phenom Josh Beckett 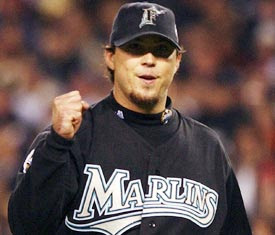 on the mound, pitched a nine-inning shut-out game to beat the Yankees in the World Series. I was jumping on the couch, the three of us were cheering, the exhilaration lasting the rest of the week (I thought - and still do - that Beckett was too doughy, but hey, maybe that extra weight provides leverage). I couldn't wait for the next season, which happened to be the year Boston beat the Yankees in their division championship (remember those extra inning nail-biters, especially that one that went, like, 14 innings or something?!), then went on to win the World Series for the first time in nearly100 years, breaking the curse of the Bambino. The season before last, my hometown team took the American League Central Division title , another occasion of elation that is burned into my cranial and emotional memory.

All those joyous events have made a die-hard fan of me, and my friends who know the game are impressed with my knowledge. I can talk baseball.

But this is the first year I've experienced the darker side, the heartbreak of baseball.

First to go was Torii Hunter, the prettiest smile in baseball. A couple of other less pivotal players were traded, but they were on my team so my heart clenched up a little. But now the Johan Santana Show is being traded to the Mets! Oh the humanity! If the talking heads are to be believed, at the least one of the heads we have talking here in the TC, Johan wanted to go. But I don't think I'm the Lone Ranger when I lament the lousy trade they made for the best pitcher in baseball. There's all kinds of talk from baseball watchers around the country. 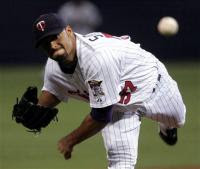 In this crazy world of New York baseball, it just might turn out that, when the Mets complete their miraculous acquisition of Johan Santana, they should thank the Steinbrenner boys most of all.

and here's how he ended:

Great work by the Mets, yet they couldn't have done it without some help from the Yankees, and some incompetence by the Twins.

From another perspective, Chop Chick in the Atlanta Journal-Constitution writes:

Here are the facts regarding my personal position on Santana:

• I think Santana is great.

• Santana is a great addition to any lineup.

• If you play with Santana, you’re going to bring in fans by the turnip truckload.

• Santana deserves as much $$$ as he wants to play in a big city like New York.

• Atlanta is just jealous because WE didn’t get Santana to come here.

• In 2003, Santana’s album “Abraxas” was ranked number 205 on Rolling Stone magazine’s list of the 500 greatest albums of all time and I wholeheartedly agree with that assessment because it’s one of my favorites.

So you see, there’s no reason whatsoever to go off on a “CHOP CHICK HATES SANTANA” write-in crusade. Because I’ve personally blown out a number of speakers cranking up many of his fine guitar solos and…

How depressing. I’ll never listen to “Abraxas” quite the same way again now.

I'm just glad I got to see him pitch that one game with a National League team (maybe it was even the Mets!) when he had to take at bats and whacked a double and eventually scored a run, all with a big smile on his face. Or when he pitched 17 strike-outs in a row, to the frenzied glee of the crowd. I'm just glad I bought a t-shirt with his name and number on it, while he was still a Minnesota Twin.

I'm sorry that it has taken me this long to respond regarding the Santana trade, but I really felt that it was necessary to allow the Twins the opportunity to fill the void in their rotation before I attempt to analyze how the trade will affect the team this year and in the future. I had not allowed myself to believe that the Twins would be able to afford the contract for the best pitcher in baseball, as it turned out, there was only one team willing to accept the money terms and length of contract that Johan was requesting. Losing Santana was inevitable, the Twins being able to field a competitive rotation without him seems to be their critical concern. If the Twins starting staff is able to remain competitive for the length of the season, I believe that the team will be able to stay in a race with Detroit and Cleveland, who are quite possibly the two best teams in baseball. Will any of the pitchers that the Twins received in the trade help to fill the gaping hole at the top of the rotation? I certainly don't believe that brought the Twins anyone that can immediately anchor a major league rotation, but it was not necessary that they do so. Livan Hernandez should eat up 220 innings or more; Baker, Bonser and Slowey will hopefully each continue to show improved development; Liriano should be able have real impact at some point during the season, even if the Twins decide to not rush his return. It may be that one, and possibly two, of the incoming pitchers may be able to win spots at the end of this year's Twins rotation. If Humber and Mulvey make the rotation out of camp and remain there throughout the season, then I believe the trade would be immediately be considered a good one for the Twins. The most significant factor, though, in determining the value of the talent received in exchange for Santans, as well as the impact that the trade will have on this year's team, will ride on the development and play of Carlos Gomez. I believe that if the Twins can find a quality leadoff hitter they will boast one of the better hitting teams in all of baseball this season and their defense may well be the most outstanding in the game if they are able to capably fill the hole in centerfield. If Gomez proves to be the answer in both areas, the Twins could have an incredible season, Gomez may receive consideration of Rookie of the Year, and I believe that the Santana trade would be thought of as a great one for the Twins, and will only look better in the years to come.