I just sent the following email to NPRs comment unit. Maybe they'll read it on air! 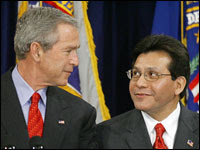 The next day I got the following response:

We appreciate your comments concerning an NPR broadcast.

As the primary news source for millions of Americans, NPR takes our responsibility to be accurate very seriously.

We welcome praise, as well as criticism, and your suggested correction will be taken into consideration.

Thank you for listening to Morning Edition, and for your continued support of public broadcasting. For the latest news and information, visit NPR.org.

And yesterday I sent the following article with a note to my Minnesota congressfolk and Speaker Pelosi:

Hi Nancy,
Please read this article about whistle-blowers uncovering fraud in Iraq - taxpayer money appropriated to the rebuilding effort is being squandered or pocketed by thieves and not going into the rebuilding effort - and how they are being treated for their fidelity to the American people. These are citizens and heroes! What have we become?!

Where and when will it become so outrageous you scream "STOP!! ENOUGH!!" I hope you all get your priorities straight and start putting a stop to the lies and misdeeds of this administration and their emmisaries. Your voice should be the loudest calling for investigations and/or impeachment of those responsible: Bush, Cheney, Rumsfeld, Gonzales, Rove, Wolfowitz and the rest of the posse.